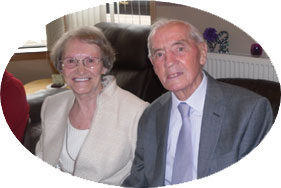 Tenants George and Nan Honeyman, who have lived in Caldrum Street sheltered scheme since October 1998, celebrated their Diamond Wedding (60 Years) Anniversary on Thursday 13th March 2014. George and Nan met through a friend and 18 months later they were married. They have a daughter, two grandchildren and two great grandchildren.

The anniversary celebrations started off with a party in the sheltered lounge for their friends and neighbours and a family party was held the following day.

Dundee Lord Provost Bob Duncan dropped in with a basket of flowers.

Dundee Lord Provost Bob Duncan dropped in with a basket of flowers.